Here is a list of Democratic Candidates in Northeast Wisconsin

These Wisconsin candidates have collected enough signatures or won their primary to appear on the Fall 2020 regular ballot. Click on candidate’s name to see their official website or Facebook Page.

Here is a link to Wisconsin Legislative Districts Viewer where you can see the various district boundaries. Click on legend in upper left for Senate, Assembly or Congressional District boundaries. Enter your address upper right for more information: https://maps.legis.wisconsin.gov/

Candidate for President of the United States: 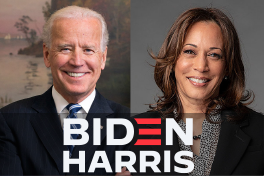 Joe Biden, has an extensive foreign policy background. As a two term vice president under President Barack Obama, he played a leading role in the administration’s policy on Afghanistan, Iraq, Ukraine, and other conflict areas. As a U.S. senator from Delaware from 1973 to 2009, he served on the Senate Foreign Relations Committee for three decades.

Born in Scranton, Pennsylvania, Biden earned his law degree from Syracuse University in 1968 and practiced as a public defender and a corporate lawyer before entering politics.

Joe Biden chose Kamala Harris as his running mate in August 2020, making her the first Black woman chosen for a presidential ticket by a major party. Harris has served as a U.S. senator from California since 2017, sitting on the Senate Judiciary, Intelligence, Homeland Security, and Budget Committees. She made a run for the Democratic Party’s 2020 presidential nomination before dropping out in December 2019. As San Francisco’s district attorney from 2004 to 2011 and California’s attorney general from 2011 to 2017, she focused on criminal justice reform and described herself as a “progressive prosecutor.” A native of Oakland, California, she graduated from Howard University and earned her law degree from the University of California, Hastings.

Candidates who have announced in our area:

I became a single mom at 19 while still in college. We faced many hurdles and endured countless sleepless nights. But we made sacrifices and I was able to work two jobs while earning a master’s degree. My background has given me a deep understanding of the challenges real families face. Washington loses sight of our lives so easily — and we can’t wait for them anymore.

When I worked with Congressman Kagen to pass the Affordable Care Act I drew on my own family’s trouble accessing necessary healthcare – and those awful times watching my son in pain because no doctor would see a Medicaid patient. No family should have to go through that, and I’m going to fight so they don’t have to. It’s time for Fox Valley and Northeast Wisconsin residents to have a representative who understands what keeps them up at night and who will fight to fix it. facebook.com/AmandaStuck8

In his “Four Freedoms” speech in 1941, Pres. Franklin D. Roosevelt stated: “Our greatest strength is our unity of purpose.” Unfortunately, here in Wisconsin partisan gridlock too often paralyzes progress. I am running to restore compromise and civility to our political system. My focus will always be on pursuing common-sense, pragmatic solutions that concretely improve people’s lives.

I will work to bring good-paying jobs to this area by directing state economic assistance to small local businesses, end taxpayer dollars going to companies that ship jobs out of Wisconsin, support family farms, and push for an end to partisan gerrymandering, which incentivizes politicians to only listen to their narrow political bases. Finally, I will always proactively seek the feedback of all my constituents. I have done this as a De Pere alderman, including hand-delivering periodic newsletters to every house in my district, and mailing them to every apartment. The best ideas come not from politicians or bureaucrats in Madison, but from the citizens of this great state. facebook.com/hansenforwisconsin

I have lived all of my life in Northeast Wisconsin. My family came to this area four generations ago with a dream and a willingness to work hard and be successful. Lately, I’m watching their dreams — and mine — come under attack by a Wisconsin legislature dominated by big donors and corporate interests.

I’m a lifelong Democrat who thinks that working people, farmers, and small business owners should have a seat at the table when there are decisions made that impact them and their families. I believe that retired people deserve the benefits they’ve worked so hard to achieve and that our children and our children’s children deserve to share the same dreams that shaped our way of life in our beautiful Wisconsin — particularly in the 1st Assembly District. I’ve decided to put my action where my values are and compete for your vote to represent you and all the people of District #1. facebook.com/kim4assembly

I am a lifelong resident of the 2nd district with a strong desire for public service. As a blue-collar worker, a former business owner, and a community volunteer I recognize numerous concerns in the 2nd district, and believe in working together to find solutions.

I understand that I can’t do it alone, I need your support. Vote Kiley 4 Assembly, and let’s get YOUR voice to Madison. I believe that together, WE can build a foundation for a better future.

I’m a Brown County native, raised in West De Pere, and my husband Tim and I are proud parents of three children. My civic engagement began early in life as an active 4-H member, competing annually at the Brown County Fair in gardening, sewing, and art. Through my community and family I learned the value of hard work.

I started my career as a nurse before serving as a vice president for a large health care organization, which is why one of my top priorities is ensuring every Wisconsinite has access to quality health care. I am a commissioner on Green Bay’s Redevelopment Committee and a recent graduate of Emerge Wisconsin, an organization that trains Democratic women running for public office. I will help solve community problems through professional and volunteer-based efforts and will be a voice for all in Madison. facebook.com/KHforAssembly

Politics as usual have failed us, and the stakes couldn’t be higher. Our communities deserve leaders who listen, leaders who understand us, and leaders who don’t put our lives on the line so we can exercise the most basic of our constitutional duties — the right to vote.

My roots and my heart are in Northeast Wisconsin. My parents’ dream for me and my was to go to college, and they fought to get me there. I earned a Master’s Degree in Public Health — as well as a student loan debt burden I am paying off to this day.

My passion for nurturing healthy communities, bolstered by leadership roles within my hospital and professional organizations and experience as a small business owner, give me a unique perspective that is sorely missing in our Legislature. The voice of medicine is absent from the body that determines much of what happens in your exam room, which is nonsensical at best and devastating — even deadly — at worst. We need to get beyond partisan politics to strengthen our communities by building relationships and bridging divides. facebook.com/KristinForWisconsin

As a long-time resident of the area and an elected Supervisor on the Marinette County Board, I appreciate and care deeply about our citizens, our communities, and the environment we share.

I am running for Wisconsin’s 89th Assembly District because I am angry that our current Representative has a history of promising to do one thing and then doing another while the people of AD89 are faced with one of the largest drinking water contamination crises in the country. Angry that he has a long history of co-authoring bills that take healthcare away from those who need it most. And angry that he has, time and time again, put big-money corporate special interests before the interests of everyday Wisconsinites. We need our elected leaders to put people before party and people before profits. We need our elected leaders to put people first.

I’m not a professional politician—I’m a working dad and I’m running for this office to improve the lives of my neighbors and to build Northeast Wisconsin back into a place where my children will want to stay to raise their own families. facebook.com/JaegerForWisconsin

Over the past 20 years, I have dedicated my professional career and personal lifework to listening to and working alongside constituents to create healthier, more equitable communities where all kids, families and community members can thrive.

Appointed to the Green Bay Area Public School Board in August 2018 and elected in April 2019, my community contributions are wide-ranging. I have worked with the community groups to raise money for local backpack drives and supported monthly community conversations and annual outreach.

My primary goal as a community leader is to advocate for the needs of Green Bay’s constituents. I strive to build partnerships across both the public and private sectors and believe authentic collaboration with a shared, common interest is critical to create a culture of belonging and to enhance the benefits of collective success. facebook.com/kristinaforassembly