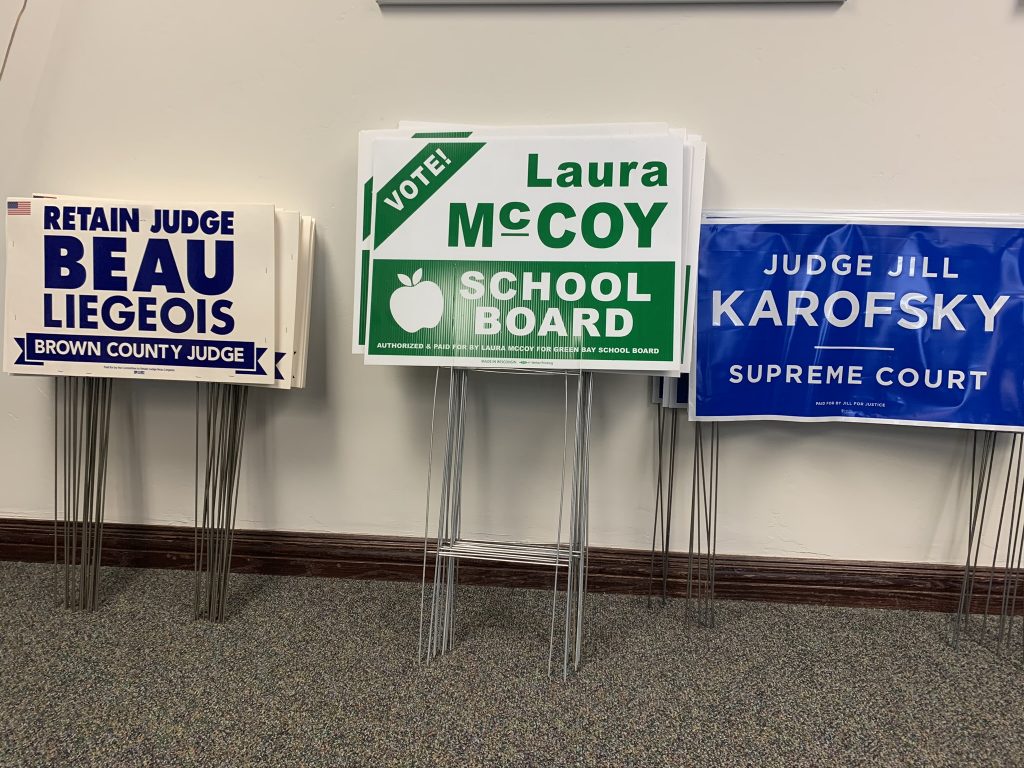 SIGN PLACEMENT GUIDANCE
Realty, campaign and other temporary signs must be placed on private property (with approval of owner).

Utilities are often installed just inside the right-of-way limit. Signs are not allowed in the area between the utility poles and the road surface. Political signs are allowed on private property with the permission of the landowner as long as the sign does not exceed 32 square feet and has no flashing lights or moving parts.

NOTE: Most local authorities (counties and municipalities) also have regulations or ordinances regarding signage in their jurisdiction. It is the sign owner’s responsibility to follow local laws. Approval of a sign application from the state does not exempt the applicant from any local ordinances, or guarantee approval from the local authority having jurisdiction. Likewise, local approval does not guarantee or exempt approval from the state.

CITATIONS AND FINES:
Citations may be issued for violating Wisconsin Statute s. 86.19, which covers improperly placed signs on state highway right-of-way. Fines may also be issued based on the seriousness of the offense. Fines range from $10 to $500 and are usually higher for second or subsequent violations.

It is tax time.

I don’t mind what I pay to the state and federal governments even if it means writing checks for additional taxes some years. That’s because taxes are the price of civilization (Justice Oliver Wendell Homes, Jr., wrote that in 1927 when a foreign corporation objected to paying taxes.).

The taxes we pay give us roads, water and sewer systems, schools and public safety. Taxes created the interstate highway system, commercial aviation and public health systems Everywhere you look, you can see something paid for with the taxes that people have paid over the decades.

Not everyone agrees about paying taxes.

People say, “I made the money, I should keep it,” and “the government has no right to take my money and spend it on (fill in the blank).”

A lot of people who object to taxes do so because they say they built their own businesses and the government should not take away the fruits of their labor.

Are they really self-made? Have they done it all on their own?

If they have employees, taxes paid for the hospitals where those employees were born, the public health systems that made it possible for them to grow healthy, and the schools where they learned skills that the business would need.

Taxes that other people paid built the roads that brought in raw materials and carried away finished products (keep in mind that it costs between $2million to $5 million to build a single mile of road). If it is an Internet business, remember that taxes paid for the Defense Department program that created the Web.

Today’s business owners and entrepreneurs rely on things that our parents paid for through taxes. But some people aren’t willing to pay taxes to build the things that our kids will need to succeed.

People who fight taxes the hardest are those who have made the most using what other people’s taxes paid for. Still, they can be persuasive and sometimes manage to get candidates elected who argue for lower taxes and claim that they are protecting taxpayers.

But which taxpayers are they protecting? Is it regular people whose kids are in schools that lack resources; the student whose university has had its budget cut; the driver who needs to pay for new tires or suspension because roads aren’t being maintained?

Donald Trump is a threat to American democracy, and we are fortunate to have a vast and historically diverse crop of candidates running against him bringing big, new ideas to a demanding and divided base.

To defeat Trump, we must all agree the 2020 Presidential election is – first, last and foremost – about defeating an unfit, corrupt and destructive incumbent. Therefore, we need to abandon the idea of finding a 2020 presidential candidate who is “perfect.”

Democrats tend to want to be swept off their feet in a fit of electoral ecstasy and for some, once they make their own personal “just right” choice, all others are deemed inadequate or somehow all wrong for the party or the times.

This mindset cost us the last election because, for many, if their “one” didn’t win the nomination, then they preferred not to vote for the person who did win or simply not vote at all. We must join together right now to vow to support whoever the Democratic candidate is to insure this costly mistake isn’t repeated.

Of course, leading up to the convention, we’ll all promote our favorite candidates and talk smack about the others. However, our allegiances are going to have to shift as the field narrows, and once the party settles on a nominee, we must accept that person is “just right,” circle our wagons and make an all-out effort to get that person the keys to the White House.